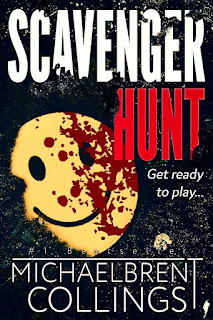 
Not that any of Michaelbrent Collings’ novels are timid, but this journey reads the rawest and grittiest I have seen from him.  Even the grungy cover implies that the game refuses to play nice. The bloody smiley face reminds me of both Alan Moore’s Watchmen cover and the “Have a nice day” t-shirt with a bullet hole between the eyes. I think this story marks a change for MbC, a new level of maturity in his work.

Scavenger Hunt tells us of five diverse and unique characters forced into a deadly game similar to Saw or perhaps a nightmarish version of The Amazing Race. Abducted—an event they only vaguely remember—the group wakes in a metal room with no indication of where or when it is.  A mysterious Mr. Do-Good invites them to play his game of terrifying choices or die.
Collings seamlessly weaves themes of action versus consequence. The story pits the lure of wealth against the desperation to escape poverty. Fate (and Do-Good) is an aggressive dealer of life choices within the definition of Home and Heritage. These are characters who seek danger to feel safe, and as they do, images of family take new and tenuous forms.
And the clock is always against them.
The pace of this episodic novel tears through an urban landscape, but the characters also to come to life with their depth. I cared about each of these people and their fates. What unsettles me most about this is that some of the characters were murders, embezzlers, and human traffickers. 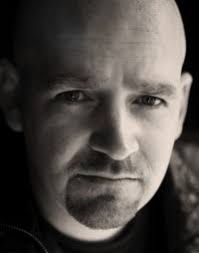 Michaelbrent Collings seeks out what most publishing professionals advise against: He writes in just about every genre imaginable. I don’t see that this has hurt him any. While he is one of the most successful indie horror writers on the planet, MbC’s catalog also includes tales about a highly skilled “FixIt” in the far reaches of space (The Darklights), a pack of hyenas that makes the most vicious lion seem docile by comparison (Predators), and even a YA fantasy where fighters battle in gladiator-style arenas nestled among five mountain tops.
When I saw Collings had been nominated for a Bram Stoker Award, I cheered.  It wasn’t long ago when being an indie author meant you were precluded for consideration of any award. MbC has been a finalist multiple times now. He is a trailblazer.

ARE YOU THE AUDIENCE?

I would recommend this book for MbC fans—especially so they might see what he is capable of when he pushes the envelope.  Thriller fans would equally be entertained by Scavenger Hunt where enemies race for a common goal to save their own lives among heists and guns and untouchable hackers.

Buy Scavenger Hunt on Amazon. (Not an affiliate link.) 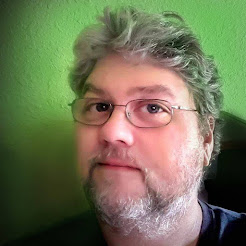